What do you See? 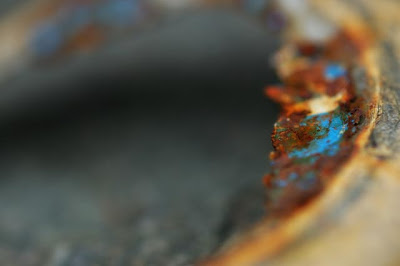 Do you know what this is? I have no idea what it is. I found it on the beach and took a picture of it because I loved the colours. Maybe if I knew what it was, I wouldn't have found it so interesting.

I was teaching piano to this beautiful little boy yesterday. He opened his book and placed his hands on the keys, but he did not begin to play. Instead, he seemed to be lost in a thought. Then, as he gazed at the page, under his breath he quietly said, "It looks like Australia."
He wasn't looking at the notes on the page, but rather, the little picture above the music. Puzzled, I said to him, "What looks like Australia?" It was a watercolour illustration of a grand piano on a stage, with a spotlight shining on it. The edges of the picture did not make a solid line. There was no frame to it...just a wash of colour. He lifted his hand and ran his finger along the outer shape of the picture. He said, "The shape of it looks like the shape of Australia."

I was astonished. I have seen the insides of these music books a hundred million times, and if I were to look at them another hundred million times, I never would have seen what he saw. I love it when someone opens your eyes to a new perspective on something...especially something seemingly ordinary. Something you look at all the time and take for granted you know what it is you are looking at. I will never see that picture the same again.

This reminds me of the most enchanting post I discovered, written by Debi over at emmatree.
I was swept away by the magic of her perceptions, and felt completely inspired to look a little closer at the world. What could I begin to see that was always right there in front of me, but I never really noticed? What magical things are hidden in the ordinary...waiting to be discovered with a fresh set of eyes?