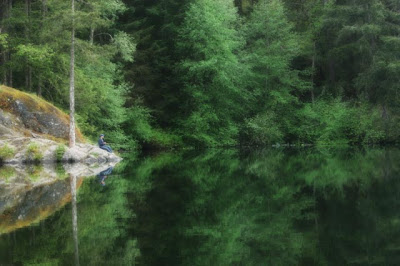 I spent some time at this beautiful little lake this weekend. We were almost at the end of the trail when I spotted this fisherman on the other side of the lake. He looked so serene. I suppose that is why many people love to fish.

When I was young, we did a lot of camping (which is probably why I love being outdoors so much) and I loved going fishing....Well, I loved the quiet peacefulness of it all, being out in the middle of an emerald green lake, the anticipation of that tug on the fishing rod, and the almost-tip-over-the-boat-grab-the-net-fast-it's-a-big-one! part of fishing. But that, for me, is where the fun ended. I just wanted to catch the fish, and then release it, no matter how big he was...that was not my dad's plan, unfortunately for me and for the fish.

The very last time I went fishing was about ten years ago. So here I was, in a little boat with my friends, trolling along the edge of a pristine little lake, my line all the way out, and I'm feeling that anticipation as I wait for that tug on my line...and a tug I felt. A little tug. My friend told me that I was probably snagging the bottom or something. He said I would *know* when there was a fish on the end of my line. Then I felt it again....and again. I pictured my hook dragging along the bottom of the lake, picking up weeds and things, and I wondered if maybe I should bring it in, just in case, but I didn't listen to that little gut instinct. We got all the way to the other end of the lake, and decided to bring the boat to the shore and start a fire. I reeled in my line, and what should be attached to my hook but a wee little fish! I dragged the poor creature from one end of the lake to the other.

I never went fishing again.
Posted by Jaime at 8:12 PM