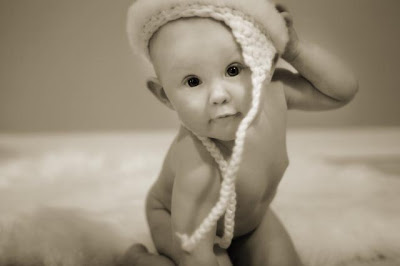 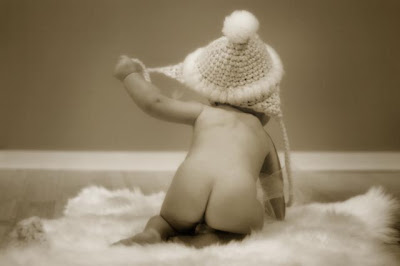 This little being enchanted every warm and fuzzy particle of my heart all week.

My mom got her the soft fluffy rug and I got her the little knit hat...and for weeks I have been waiting to combine all these elements into a photo session with my niece Sarai.

But this was no easy task! I needed a team of loving and patient kin to make this happen. Trying to keep her on the rug, with the hat on was immensely temporary. Every time we put her down, she would start crawling toward the camera at speeds I hadn't seen her obtain before (I think it's because she is happiest and most free in her birthday suit). And it looked so funny through the lens... these bright happy blue eyes getting bigger and bigger in my frame as she smiled and reached for my camera...I couldn't stop laughing, which made my eyes water and everything was a crazy high paced blur...which made it all the funnier!

But I did capture her. I caught a few tiny precious precious moments before she pulled her hat off by the strings for the hundredth time, before she scrambled off in another direction, squealing with mischievious delight.

The next time I see her she will be walking. She will be a whole other new little being, with new mannerisms and funny little ways about her to adore and absorb into memory. And as sure as stars twinkle, I will be watching her through my lens, trying to capture a part of her that will never grow up...that will stay contained in that little photograph... to help me remember what she was like at that transient age, when she tugged at another of my many heart strings inscribed with her name.
Posted by Jaime at 10:06 PM 27 comments: 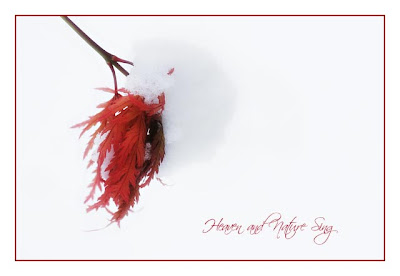 It all begins for me tomorrow as I make my way inland where the snow is thick and billowy, and the cold air flirts with my blushing cheeks.

The coming days promise me...

Cozy gatherings with the ones I hold most dear to me....baby kisses and cuddles and snuggles. My little niece's first Christmas. Oh my soul...I can hardly contain the love.

A Skating party on a frozen lake, roasted marshmallows and crackling flame.

Snowboarding down powdery slopes and soaks in natural hot springs...caves and all.
New wanderings through an adorable little town that is new to me and my camera. This place is known for its cute little cafes and shops. It is a mecca for artists and creative visionaries, free thinkers and environmentally sensitive souls.

What pieces of these sweet days will I capture? What stories will present themselves to me? What new memories will I tuck away for safe keeping inside my heart's treasure box?
And what about your precious heart? May it be delighted by all things sparkly...sugared stars through frost bitten windows...peppermint swizzle stix dipped in hot chocolatey mugs....manderin scents and gingerbread crunches...dusted tree tops...knitted hats and mittens with strings...a snowflake softly falling...
falling...
a small offering, a token of peace.
And love.
You are so very loved.
xo
Posted by Jaime at 8:44 AM 17 comments: 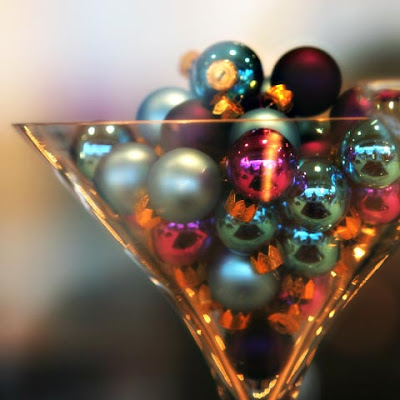 Remember
This December
That love weighs more than gold!

~Josephine Dodge Daskam Bacon
Posted by Jaime at 11:19 AM 14 comments: 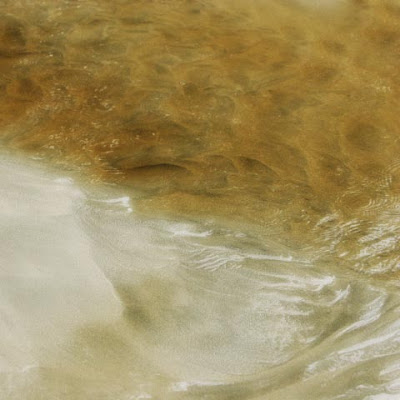 I thought I would share with you some of the moments of beauty that I captured and tucked into my soul pockets over the last several days...

~ I woke up the other morning to the most gorgeous ray of winter sunrise flowing through my bedroom windows. It looked as though a soft incandescent lamp was lit in the corner, embracing the entire room in a warm glow. It was so alluring, I ended up falling back into my bed so that I could be hugged by this light for a few more moments.

~ I watched a young man walk across a busy street holding a cane and wearing a top hat. It was like being tossed backward in time. What was even more beautiful was observing the looks of curiosity and wonderment by the surrounding people as he passed them by. It's quite amazing that a simple top hat can unite a group of strangers.

~ I looked up and saw 23 seagulls gliding silently together in the dark sky. The clouds behind them were charcoal grey but the sun was illuminating their still bodies and motionless wings.

~ While sitting in a restaurant, I witnessed a man losing all sense of the world around him as he shared a secret moment with his nine day old baby girl. He was oblivious to his surroundings as he held her and made funny faces at her while she stared back at him, her eyes big, blue and wide open.

~ I rode on the most gorgeous carousel, and as I sat upon my gentle giraffe and watched the world spin round and round, I noticed that there was only one child turning with me...the rest of the riders were adults, seeking to reclaim a lost part of their childhood, laughing and giggling, their faces beaming as they turned in dancing circles.

~ In the night, while the wind was howling, I held a tiny hummingbird in my hands as I helped it escape a moment of sleepy disorientation. How delicate and completely beautiful he was in his papery lightness and fragility. A precious moment I will never forget.

~ Standing before the sea, I gasped as I saw a large fish leap, three times, out of the water and splash down. Was he fleeing from a bigger hungry fish or was he playing? Do fish play? When they dart every which way in their silvery shimmering schools, do they feel the bliss of the ability to move so freely through the water?

I saw so many beautiful things. And as long as I have eyes to see with and a heart to feel with, I will always look for the beautiful.
Posted by Jaime at 12:39 PM 21 comments:
Newer Posts Older Posts Home
Subscribe to: Posts (Atom)