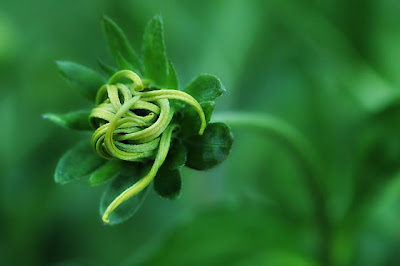 What a swirling beauty she is...her full potential not yet realised.
What secrets is she hiding within those coiled petals? What will she look like when she opens her twirling dancing arms to the sun and sky?

How brave she is.
Despite her fragility, despite all the threats taking shape as nibbling insects, heavy raindrops, greedy plucking hands, she will gracefully unfold into a sunburst of vibrant colour. She will paint the garden with her smile, enticing the bees with her radiance. And she will flourish with a gentle confidence. She does not question...she belongs here.

And when her fleeting time here comes to a close, she will curl up once more and retreat back into the earth where she will leave a beautiful legacy, nourishing the soil for future generations of buds and beauties.

She may be small, but her lessons are profound.
Posted by Jaime at 10:32 PM 23 comments: 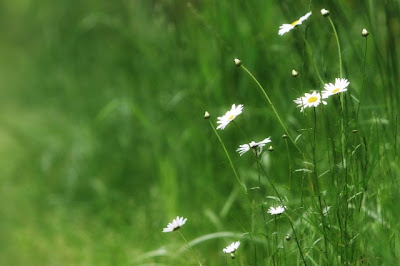 Being a girl of few words these days, I thought this little meme that I found over at Relyn's lovely blog would be a perfect thing to post...as it requires few words. Specifically, one word answers.
Feel free to play along :)

2. Your significant other? starlight ;)

12. Last thing you did before logging on? raingazing

13. Where did you grow up? lakeside

14. What are you wearing? jeans

19. Something you're not wearing? snowpants

I'm off to the ocean again tomorrow...maybe I can find my voice again while I'm there.
See you all in a few days!
xo 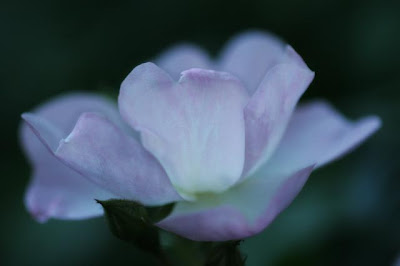 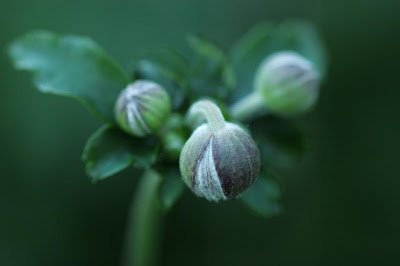 It is a wholesome and necessary thing for us to turn again to the earth and in the contemplation of her beauties to know of wonder and humility. 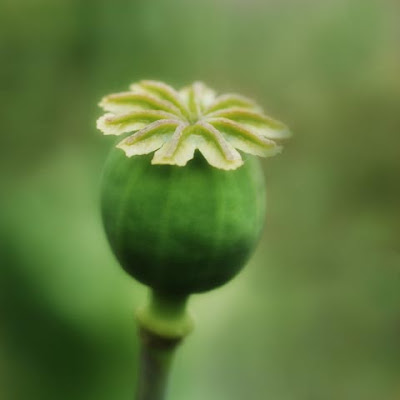 I've been feeling rather quiet the past little while. Not a whole lot to say as I drift through these lazy days of summer, and I'm trying to listen to my own rhythms. But despite my lack of things to say, I have noticed that since I started blogging I have developed quite an interest in words.

I was walking up the mountain the other day when out of nowhere, I had an intense craving for cupcakes. A cupcake. A white one with white icing, and maybe a little flower on top of it. Rarely do I give in to these cravings because if I made them myself, I would not just have one, but one dozen, and all I really want is one. We need a good cupcake store in this town.
Anyway, as I was thinking of this little cupcake that I so desired, a thought occurred to me....why are the words *icing* and *frosting* used to describe something you top a cake with, when they are related to snow and ice? Unless it is a frozen cake, it is neither icy nor frosty.

The word *understand* is another one that puzzles me. If you stand under something, can you get a better sense of it? Is that why we say we understand something? Personally, I think if I stood under something, I wouldn't see very much. I might get a slightly different perspective, but still...the bottoms of things are not all that revealing.

I have many favourite words. I'm not attached to their meaning, so much as the sounds of the words themselves. For instance, I love the word *helicopter*. I have no real interest in helicopters...it's just a cute word, and it's fun to say. Helicopter.
And *orange crush*. Just say it out loud to yourself right now. Isn't it great? It makes me thirsty... not for Orange Crush, but for something more satisfying and thirst quenching. Speaking of that, I always used to say "I need to thirst my quench" by accident when I was little..the words sounded better in that order to me. I still have to stop and think before I say that phrase to make sure I put it in the right order.

I don't speak any other languages fluently (yet), but I have discovered some wonderful sounding words. Julie once wrote a post on language, and she mentioned some interesting danish words. One of them made me laugh....the danish word for marshmallows is *skumfiduser* I LOVE that word!! I wish I could use it functionally in a sentence...I will have to find a way.
My friend's grandfather used to call her his *kukla mou*. It's greek for little doll. So sweet.
And I have fallen in love with a new french word. * Coquelicot* (pronounced as koklieco) is french for poppy. A beautiful word for such a beautiful flower...I have lovingly embraced it for many secret reasons.

There are so many wondrous words. I might have to post about this more often as new words come to me. All of you positively *pulchritudinous* poets and writers who visit me...do you have any favourite words or phrases?
My thesaurus doesn't seem to uncover many of the most beautiful gems. Maybe it's because often, words sound best when they are carefully strung together to form their own unique melody..their own music. A daisy chain of beautiful sounds that gently roll off the tongue and linger in our hearts.

What's another word for thesaurus?
~Steven Wright
Posted by Jaime at 11:45 AM 21 comments: 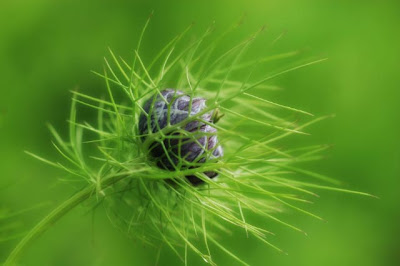 I think there just might be a large invisible bullseye on the back left bumper of my car. I can't see it, but I think everyone else on the road can, and they are using my car for target practice.

I have had my new car for 5 months, and in that time two people have run into the same back corner. The first incident happened two weeks after I got the car...in my own driveway! I got it fixed...all was well. The second happened yesterday. .. and here we go again.

This leads me to think of the synchronicities that have happened in my life. They seem to happen all the time and most of the time, they are good ones, but could there be a flip side in the world of coincidence?

I would like to tell you the story of my most significant synchronistic event. Before Taro came into my life, I had another little bunny named Jasper. He was born with chronic health issues that couldn't be cured. I put him through one surgery when he was about 4 years old, and I told myself that I would never put him through that again if I was faced with the same problem down the road. And I knew it was only a matter of time before I would see this issue arise again.

We had another 4 happy years together, and when he was 8, I could see his symptoms appearing again. He was visibly uncomfortable, so I knew deep down that this would be a one way trip to the vet for him. It was one of the hardest days of my life. Not only was I saying goodbye to a long time friend, but despite his health issue, he still looked young and healthy. My friend that accompanied me asked me, "Are you sure you want to do this? He still looks so full of life."

But I knew. I knew it was time, and I didn't doubt my intuition. He passed away in my arms, outside in the sunshine. I went home devastated.

About a week later, I had just started the car and was on my way up the road when something caught my attention on the radio. A man was narrating a story on CBC ( a unique Canadian station that tends to focus on the arts) I had never really listened to this station before, but here it was... and this is what I heard...

"And then there was Jasper....He was only eight...The doctors told us that they could prolong his life if we wished, but his quality of life would never be the same."

I almost crashed my car into a telephone pole. I literally had to stop on the side of the road and take a few deep breaths. Did I really just hear that? I had a Jasper...he was eight...we could have prolonged his life too, but it would have been selfish of me, and he would be living in pain for the rest of his life. Besides, eight is quite old for a rabbit.

I turned the car around and went home to call my dad. He listens to CBC all day as he paints. Maybe he could tell me a little about what I just heard, and if I heard it correctly. Sure enough, he was listening too, and he told me it was a continuation of a story about a little boy named Jasper who died of cancer.

I am not a religious person, but when things like this happen to me, I can't help but wonder what greater force is at work...or play? This wasn't the first time I was struck by such a synchronicity, and it certainly wasn't the last. They happen so often, I'm not all that surprised by them anymore. I just smile and thank the universe...and it leaves me with a comforting feeling...as though I am right where I am supposed to be.

And everything is ok.
Even my poor little injured car.
Posted by Jaime at 12:04 PM 15 comments:
Newer Posts Older Posts Home
Subscribe to: Posts (Atom)