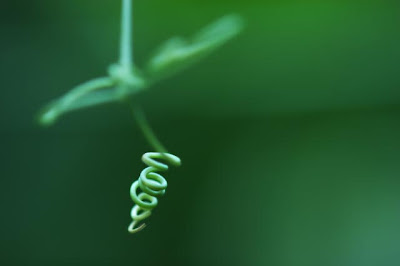 This picture makes me giggle...inside and out. It looks like how I feel. It looks like a crazy bundle of swirling excitement about to take flight. Do you see its wings hovering above?

I am about to take flight. To France. On Wednesday. This has been a dream of mine throughout my whole adult life, and in three days its going to be a reality. Yep. I feel just like a twisting, curling, twirling spiral of energy.

What kinds of experiences am I going to have? What new and wondrous things will my eyes open up to? How many memory cards should I bring with my camera? I better go get an extra one...just in case.

I am so sorry I haven't had a chance to visit you. I miss reading your blogs. July has been a frenzy of activity and I have found it challenging just getting the odd post up on my own blog! I miss you all so much and will try to make a quick visit before I leave.

I will be gone a month, and I hope to collect all kinds of interesting photos, some of which will no doubt end up here in this space when I return. I can't wait to see what kinds of things I will post! It is such a big unknown. All I know is that I will surely find myself captivated by a hundred million things....and I will surely run out of room on my memory cards. For sure.
Posted by Jaime at 7:09 PM 22 comments:

Tell Me a Story 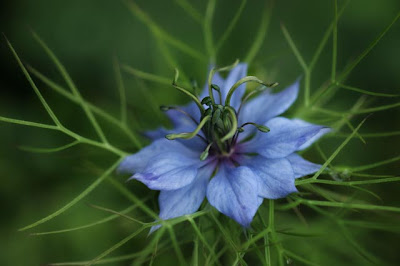 This flower is called Love in the Mist. Isn't that beautiful?
Well, the scientific name is Nigella, but I prefer the other name. It tells such an enchanting story...those delicate fern-like tendrils look like they could vaporize into a misty blanket, cradling the soft purple in its protective loving arms.

I passed a man on the mountain yesterday who I see quite often wandering the hilly cliff sides, his lab by his side. It had rained the day before and everything was moist and deeply fragrant...nourished after a long dry spell. He mentioned to me how his dog loves to be out on days like this, exploring everything with his curious black nose. He said, "A dewy morning tells many more stories than a dry summer afternoon."
Hmmm.

Although, the story the mountain was telling me yesterday was an upsetting one. As I continued on my way, I discovered to my horror that a large part of the grassy cliff had recently suffered a brushfire. To my nose, it felt as though I was walking across a giant ashtray. I always worry during the summer that the mountain and surrounding forest will burn, especially when it is so dry. If something happened here, I don't know if I would ever get over it.
As troubling as it was to see half the mountainside charred and black, I was so grateful that it didn't reach the trees. It was a reminder to appreciate every moment I have in this sacred space. The whole forest could be quickly wiped out with one careless flick of a cigarette.

I may not have the nose of an inquiring golden lab, but I too am attentive to the stories of the natural world. Life is fragile and precious and we need to lovingly protect it, like the gentle arms of a Nigella.
Posted by Jaime at 9:40 PM 12 comments:
Newer Posts Older Posts Home
Subscribe to: Posts (Atom)