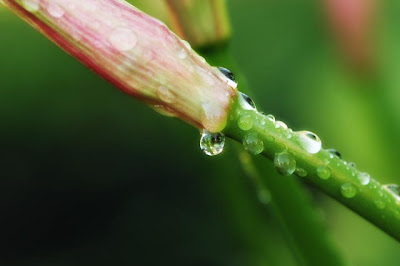 One of the reasons I love the rain so much is because water droplets are a photographer's dream...at least for this photographer! If you look close enough, you will discover hidden worlds within the reflections of a water droplet. So magical :)

I am spending the week looking after a friend's dog. It is a bittersweet time, as I was just told that he has an aggressive form of cancer and isn't expected to live more than a month or two. We have developed quite a bond over the past eight years...this is as close as I will probably ever get to having my own dog so our time together is very important to me. Whiskey is very special. He is an Australian Shepherd, but he knows as well as I do that he's part human. He smiles (most people think he's showing his teeth in an aggressive gesture, but I don't know too many aggressive dogs that wiggle their bum in excitement as they show off their pearly whites), he talks and tells you all kinds of stories about his day when you walk in the door to greet him (the sounds are a little odd, but we pretend to understand), and he comprehends more than a dog really should. His owners have to spell out words if they don't want him to know what they are talking about. He's quite emotionally complex, which is why I love him so much. If he needs a bath and you tell him he stinks, he gets quite hurt...looks at you with his big beautiful expressive eyes, drops his head and slowly walks away. It's heartbreaking. So there will be no baths this week for this little lovebug...only hugs and wet nose kisses, extra treats, gourmet food (ingredients listed on the can: duck, golden delicious apples, garden peas, yukon gold potatoes, trout, etc...he eats better than I do!), plenty of walks through the forest, and lots and lots of love.