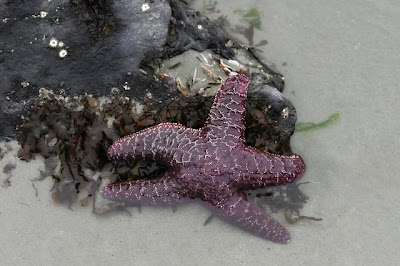 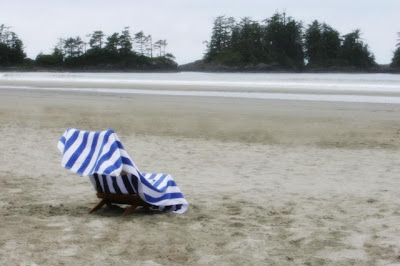 Did I tell you how how much I love starfish?
Always looking for them.

I feel as though my shoulders have dropped about a foot and my breathing has become deeper and more mindful. I am now in turtle mode.

My time on the beach was just as I had hoped it would be. Although the sun didn't come out as much as we would have liked, it did burn its way through the clouds enough that it warmed the gentle breeze as well as the sand beneath our toes. Fast paced mists came and went and so did the waves. Although there was never a silent break from the soothing droning roar, I don't think I have ever seen such gentle surf here...it matched my mood so perfectly.

The days were long and full of nothingness. There are no real stories to tell. There was no need to *do* anything or go anywhere beyond the reaches of the beach. I would walk and walk, finding interesting things along the way...

A sand mermaid lay on the beach...so glorious in her beauty. She had a curvy voluptuous tail, and long reddish seaweed tendrils for hair. She even had white sea flowers in her hair and was adorned with shells. Her time on the beach was fleeting as the rolling incoming surf licked at her fins, enticing her to come back to her watery home.

Sand pipers scurried across the sand at a frantic pace. They are the sweetest little birds. Tiny twig-like legs with no knees moving lightning fast as they dug their long pointed beaks into the sand, looking for something to nibble on. Then they would take flight together, all at once, moving in the same direction, turning this way and that so all you could see were quick flashes of silver, then white. How do they all know which way to turn so suddenly like that?

Bald eagles were circling right overhead. They would carry branches over to one of the closer islands as they prepared to nest and raise their young. I saw the same pair last year on the same rocky island. They sit out there for hours and hours...all day and night. Such fiercely dedicated parents they are. As they flew right over my head, I was in awe. Their massive wing span has to be seen to be believed. So beautiful.

The nights were no less wondrous. We started a fire on the beach one night and started drumming. Along came a man who had been wandering the beach... he asked us if he could join us. We welcomed him into our circle, and to our wonderful surprise, he opened his case and pulled out a didjeridu. A magical time was had by all under the stars this one and only clear night.

Although I am back home now, my spirit is still there, soaring with the eagles, running along the sand with the sandpipers, moving to the deep rhythms of the drums, drinking in the waves and the mists.