It's All Gone Pear Shaped 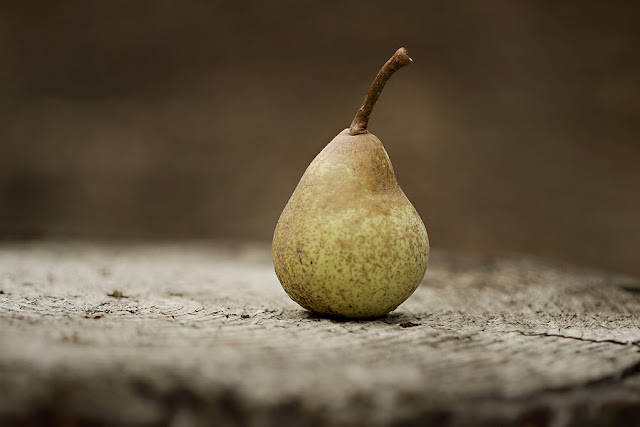 It is apple crisp time. I only make it in the fall. I only want to eat it in the fall, when the air is as crisp as that delectable sugary oat topping. I was given a bag of apples... a wonderful woman I know has two apple trees and a pear tree in her yard and this year she had more fruit than she knew what to do with.
I happily brought them home and knew exactly what to do with them. I started peeling and chopping. Inside the bag was one lonely pear. So in a spontaneous act of culinary creativity (I don't cook, so bear with me) I decided to add a pear to my apple crisp.
And I probably won't do that again. It just doesn't taste the same. Actually, come to think of it, I should have known better. As much as I love the voluptuous shape of the pear, and I adore that sweet little english phrase *it's all gone pear shaped* ...  I'm not entirely smitten with them when it comes to eating them.
Except for bosc pears. They look almost rotten from the outside, all brown and plain. But they have a most satisfying sugary crunch. And that's just it....they have to be crunchy.
As I think about it, so do apples. Except when they get cooked up into a sweet gooey mess underneath a blanket of apple crisp topping.
Unfortunately, this crisp did go a bit pear shaped. Pardon the pun.
Funny how I keep reaching for a spoon, though.
Posted by Jaime at 11:43 PM